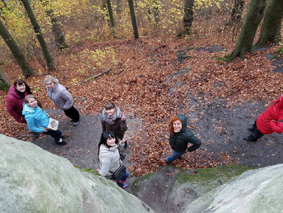 28th of October staff members of BaDM went on a very interesting excursion, 30 km away from Lvov in Stolskoe village. There is a unique site of ancient town the territory of which covers more than 250 hectares, so called Stolskoe gorodishche. Mr. Orest Korchinskiy, the discoverer and principal investigator of ancient monuments, the archeologist, candidate of historical sciences, the leader of Verhnednestrovsk archeological expedition of the National Academy of Sciences from 1987 to 2012 gave us a tour around the gorodishche.
Very few people in Ukraine are aware of Stolskoe gorodishche, although it is registered in the State Register of Immovable Monuments of Ukraine. It is believed that exactly Stolskoe and surrounding areas were the center of White and Great Croats who lived on the territory of modern Subcarpathia.
Defensive earth mounds of total length of about 10 km, cave-town that was later used as monastery, sacrificial altar of pagan temple have survived until nowadays. According to Mr. Orest this gorodishche was bigger than ancient Kiev in IX- X century; its population was about 40 thousand. It was a real megapolis with towers and citadels, fortifications and pagan temples.
Scientific expedition worked for25 years! The scientists confirmed the existence of big voids under the ancient town at a depth from 6 to 30 meters. An interesting fact is that all these voids are of correct oval shape that means that most probably they are man-made! However, further searches and explorations of dungeons were suspended due to the lack of resources the availability of which, unfortunately, is not expected soon.
Monastic cells near Dubrova village
Here used to be monks’ caves, magi and white Croats used to live here. Today the inhabitants of village Dubrova store the food in these caves.
Dyryavets stone on which ancient Croats arranged sanctuary.
Three stripes are carved on the stone symbolizing three environments: fire, water and wind. Nearby there is a stone of ellipsoid shape symbolizing earth.
Also we visited caves in Ilove village. There was a pagan sanctuary in the shape of maternal womb in the cave.
The weather let us down a bit: the rain was drizzling, the ground got soaked, but we quickly overcame the way upwards. It was harder to go down - shoes were slipping; there was nothing to hold on. But we did it all together! Alive and healthy, nobody got lost, we returned to the place.
Together - we are force!